Finance and the Public Service Minister, Hon. Audley Shaw, said that three major international investors have expressed interest in the development of the Vernamfield Airfield in Clarendon into an aerotropolis.

He said the investors – two from China and the other from Europe – have indicated that they are willing to invest between US$2 billion and US$3 billion in the project.

The Minister was addressing the launch of the Sygnus Capital Limited (SCL) investment company at the Porsche Dealership in New Kingston, on July 12.

An aerotropolis is a new urban development form comprising aviation-intensive businesses and related enterprises that usually extends up to 25 kilometres outward from major airports.

These developments are similar in form and function to a traditional metropolis, which contains a central city core and its commuter-linked suburbs.

Transport and Mining Minister, Hon. Mike Henry, had indicated earlier this year that there were some local commitments for investment in the project.

Meanwhile, the Finance and the Public Service Minister informed that the Government is targeting growth of between two and three per cent for 2017/18.

He said the latest data from the Statistical Institute of Jamaica (STATIN) showed that, despite drought, the economy expanded during the 2016/17 fiscal year.

“We had projected 1.57 per cent economic growth for the fiscal year, but we had a setback in the last quarter of the (fiscal) year (due to) drought conditions…I want to advise you that STATIN, just a few days ago, has given us the final figure, the economy grew by 1. 3 per cent,” he noted.

The Minister congratulated the principals of Sygnus Capital Limited on the range of financial and investment instruments available for micro, small and medium-size enterprises (MSMEs).

The company was formed by a group of successful investment bankers and entrepreneurs using innovative ideas to unlock capital and address the unmet financial needs of clients.

Chief Executive Officer (CEO) Berisford Grey, noted that the vision of Sygnus is to “drive the velocity of economic growth across the Caribbean using innovative financing solutions”.

He said the company will serve its clients by providing access to non-traditional financing solutions for companies and independent investment advisory solutions for investors.

Sygnus launches into Caribbean financial market
Sygnus raises over $5.5-b for clients so far 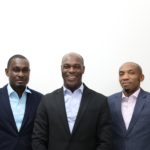