HAVING completed its US$21.22-million acquisition of Puerto Rico-based Acrecent Financial Corporation on February 28, Jamaica-based Sygnus Credit Investment (SCI) says it is on the verge of completing the integration of the entity into the Sygnus family. The date for completion is set at July 2022, four months after the acquisition and much faster than the normal one to two years these transactions normally take to finalise.

“Acrecent is an internally managed private credit firm,” Jason Morris, co-founder of Sygnus, told investors on an earnings call late last week. “What this means is that it has its own set of employees and its own operational costs, etc. To integrate it fully into SCI, and the deadline for that is going to be by July 2022, that entire operation will be ‘restructured’ where, just like you have SCI with a pure financing firm with no employees and the internal investment manager who charges a management fee, that’s the structure that will be reflected by July 2022,” he continued.

Morris told the Jamaica Observer that the Sygnus investment management entities that will become the portfolio management companies have all been set up already in Puerto Rico. He reiterated that after the restructuring is complete, Acrecent Financial will have no staff. It is not clear how many employees will be affected by the restructuring. However, Morris outlined, “All of the Acrecent operations and staff will flow into the Sygnus company in Puerto Rico,” seemingly suggesting that some, if not all employees will be offered employment in the Sygnus entity that has been set up. “So what you will have is a pure clean balance sheet with private credit assets, that’s the integration that will happen by July.” He said the Acrecent Financial Corporation name will not be changed.

Morris also told the investors present that, due to the structure that was used, Acrecent will not be consolidated all the way up into SCI. “The investment will be listed as an investment in Puerto Rico Credit Fund on SCI’s balance sheet going forward.”

“What SCI will get [from its investment in Acrecent] will go straight to bottom line, so it’s the pure net value that will flow through to SCI which is clean and dare I say, ‘juicy’, Morris added by way of illustration. “The only thing that is coming into SCI would be the net benefit, after you ship out all your expenses.”

Morris explained, “We have an executive, an investment manager who has actually moved from Jamaica and is now residing in Puerto Rico. He will be residing there a while yet, first of all to lead the integration process overall. There are two sets of integration going on, integration of Acrecent into SCI proper and then the integration of the operations of Acrecent into the portfolio manager which is going to be Sygnus. There will also be the building relationships in the market to scale the business. We are actually working with a consultant, PwC (PricewaterhouseCoopers) with regards to the integration process.” By scaling the business, Morris told his audience that he meant doubling investments.

Sygnus is currently tapping the capital markets to raise US$14.7 million via a preference share offer which is expected to be wrapped up in days. The fund also currently has US$3.4 million in undrawn credit lines on its books to supplement the monies to be raised. In total, funds are to be part of financing for US$20 million in approved transactions that SCI already has in its pipeline, that are just awaiting documentation and drawdown.

Strategic alliances are also being sought with international financing partners, Morris said, to diversify financing sources outside Jamaica. He added that Sygnus staff members are currently in New York carrying out negotiations “with more than two strategic partners”, adding that an announcement could be made as soon as the end of this month, if and when the aim of the negotiations comes to reality.

The structure of the company provides room for leverage and a dynamism in strategic response. Morris added, “In a sense, by not being required to be consolidated up into SCI, that actually gives SCI a huge advantage in terms of if the Puerto Rico business wants to raise capital, it could sell some of its shares to investors, it could do an IPO (initial public offering); it could do a number of other different things to generate substantial benefit to SCI shareholders.”

Morris added that what the company is seeking is a revolving line of credit from these strategic partners. “We may seek US$100 million or US$200 million, but we do not want it all at once on our balance sheet attracting interest expenses, while we are not making anything from it. So we want that credit to be revolving, being accessible when we need it to be drawn down for investments.”

Integration aside, Morris said Acrecent will scale back from some of the countries in which it now operates. Through its Acrecent acquisition, SCI has portfolio investments in 13 territories, up from seven before the acquisition. Assets located in the Dominican Republic, Mexico, Panama and Costa Rica are assets that were “ring-fenced” during acquisition and are currently being closed out. When this is done, the entity will be left with portfolio investments in just nine territories: Jamaica, Puerto Rico, the ABC Islands (Aruba, Bonaire, Curacao), Cayman Islands, Barbados, St Lucia, The Bahamas, the United States and the SSS Islands (Sint Maarten, Sint Eustatius and Saba).

Though the company is looking to close out of some territories, Morris told the Business Observer, “In the future, we may decide to pursue opportunities in those countries, but at this stage, we will not be doing that. Our aim now is to expand and dominate the Puerto Rican market. If in two years we see the opportunity in countries like Mexico or the Dominican Republic or any other, we will pursue it. For now we are focused on the Puerto Rican market.”

However, with Acrecent, Morris reiterated the scale of the opportunities available in Puerto Rico alone, a country with a US$100-billion economy, which is multiple times larger than Jamaica’s US$16-billion economy.

It has also given “exposure to a fundamentally stronger set of portfolio companies, access to industries that are not available in the English and Dutch-speaking Caribbean such as the pharmacuetical sector and to a lesser extent, also commercial real estate private credit investments,” he outlined.

“This effectively means that part of Acrecent’s business is to actually have what we call ‘true sales’ where [it] structures transactions and then sell them off the balance sheet to a third party, and then those parties might pay Acrecent a small money to actually service those assets. So those assets are not interest-bearing assets for Acrecent, they are just assets that are being serviced.”

Morris emphasised, “This is a very important part of the business because what it means is that Acrecent has two revenue lines. One of them is the net interest income, and the other one is getting upfront gains from structuring and selling assets off the balance sheet, primarily leases to third parties.”

The plans were outlined as SCI reported record net profits of US$2.83 million up 23.6 per cent for the nine months to the end of March. “Net profit would have been substantially higher; however, the performance for the third quarter itself was a bit underwhelming,” Morris said.

That was because for the January to March quarter alone (excluding the first six months of the company’s financial year which runs from July 1 to December 31), Sygnus recorded a US$370,000 dip in net profit. This was primarily driven by two factors: US$288,000 in foreign exchange losses that were recognised upfront from the use of index notes on the liability side of the balance sheet based on the differences in the exchange rate used to price the index notes and the exchange rate on the day. The second item has to do with increased provisions for credit losses due to one specific company, an entity in the hospitality sector in an unnamed country which Morris would only assure was not Jamaica.

“It’s a sponsored portfolio company, which means it has large financial backers.” It was issued with demand letters by its senior and junior creditors and placed in receivership after a creditor filed a petition to wind up the company for non-payment of monies owed. The portfolio company has been given a three-month window to secure external financing to refinance its debts and stop the wind-up petition from going ahead. The collateral coverage for SCI’s junior position was adjusted downwards, resulting in a US$576.1 thousand impairment charge on the balance sheet for the portfolio company up to May 31, 2022.”

“The asset in question is actually an excellent asset. It’s beachfront, it’s a relatively new asset as well. It’s in a market that is doing extremely well. However, this situation, which actually forced the hand of the senior creditor and other junior creditors to file their claims and put the company into receivership, [was] because this petitioning credit could actually have derailed the ship, so to speak. We are continuing to proactively manage this risk in terms of having constant dialogue with the sponsors for this portfolio company and senior creditor and legal counsel to ensure that we keep our fingers on the ball with regards to the outcome.

Morris also outlined that the timeline to achieve its core revenue target of US$8 million has been reset from December 2023. “What is likely to happen is that this timeline will be extended to June 2024 so that it will be aligned with the financial year end and that number of US$8 million is likely to be increased north of US$12 million. So, we are extending the timeline by six months and the revenue by 50 per cent.”

He also said plans for a share buy-back, slated to start in the company’s fifth year, will still go ahead. He noted that an announcement will be made sometime in September 2022 about how the company will proceed. 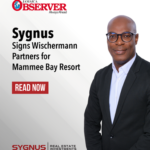