Net profit attributable to shareholders was US$2.05 million, US$626,880, or 44 per cent, more than the US$1.42 million earned up to June 2018. CEO Berisford Grey says that a more aggressive approach to the deployment of capital was at the heart of the good performance.

“The main thing that drove revenues on our investments was the increasing velocity of deploying capital raised from the IPO (initial public offering) into good investments. We raised US$20 million from the IPO last year, and during the year, we invested over US$18 million in a number of new investment opportunities in medium – sized firms across the region,” Grey said.

Sygnus earns through interest income and the upsides of profit-sharing, according to Grey. He says that SCI is pioneering the business of private investing where growth comes primarily by raising either new equity by, say, a rights issue or by using leverage to enhance the equity to investors.

He says the average yield on SCI’s portfolio is 12.8 per cent, which has a lot to do with how the company structures the deals. Grey says that those who were sceptical about SCI’s new approach to investing are seeing the real benefits now.

“We’re in the process of proving our doubters wrong. The company is only two years old, and the portfolio itself is still growing. Our promise to investors was that they would get a dividend yield of 7.5 per cent. Annualised dividend yield is presently running at about six per cent, and this is under two years into a five-year investment horizon,” he said.

Meanwhile, the SCI board announced interim dividends of US$870,000. This brings the total payout for the fiscal year ended June 2019 to US$1.48 million, according to Grey. He says that in the context of a firm that is pioneering private credit investments and non-traditional financing, the total amount is a significant dividend payout that is better than almost any stock on the market right now.

Grey says the SCI board has approved US$15 million in capital raise. He says that this will be timed to coincide with the implementation of projects that are on stream. Grey says that SCI does not want to have funds lingering and not invested.

“We want to have the right balance between excess liquidity and investments, so we manage within a very disciplined plan so that we end up with a nice average by finding new opportunities that will generate a return for our investors,” he said, adding that SCI is going for even more growth in 2020.

“What we’re saying to our stakeholders and the investing public is that we are committed to establishing and growing Sygnus Credit Investments to be more than a pioneering credit investment firm but, rather, the leader in this arena. We will continue to make the strategic investments and manage risks with a strong overlay of good governance,” Grey said. 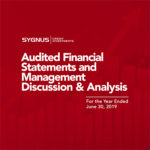 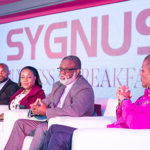